Sacks Screens New Documentary: “A Taste of Heaven: The Ecstatic Song and Gospel of Maestro Raymond Anthony Myles.”
The documentary, written and directed by SC&I faculty member Leo Sacks, was enthusiastically received at the New Orleans Film Festival on November 5. This spring, Sacks will share his filmmaking expertise in his JMS course “Digital Storytelling.”

As SC&I faculty member Leo Sacks prepares to teach a new course called “Digital Storytelling” during the spring 2023 semester, he’s also celebrating the forthcoming release of the documentary he directed, “A TASTE OF HEAVEN: THE ECSTATIC SONG & GOSPEL OF MAESTRO RAYMOND ANTHONY MYLES.”

Myles, who was known as the “Gospel Genius of New Orleans,” was more than a sensational entertainer. He was also a transformative schoolteacher and a catalyst for change in the Church until his shocking murder in 1998, on the cusp of music stardom, in the projects he could not leave behind.

Sacks was a journalist on assignment for Billboard magazine when he heard Myles perform for the first time in the Gospel Tent at the New Orleans Jazz & Heritage Festival in 1992. Ten years later, Sacks would produce Myles’s only full-length studio album which was critically acclaimed but rejected by the gatekeepers in the gospel music business. 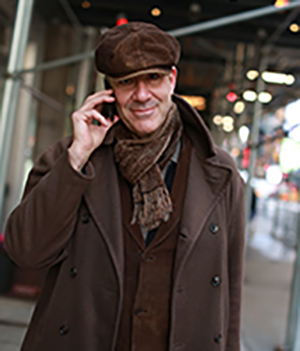 “The perception that Raymond was queer was too great a challenge for them to market him to their evangelical fans,” Sacks says.

In the aftermath of Hurricane Katrina in 2005, Sacks was compelled to tell the story of Myles’s short, turbulent life. “The film is part of the preservation of New Orleans’s cultural heritage,” he notes.

Sacks received a fellowship to support his filmmaking work from the Better Angels Society/Library of Congress/Ken Burns Prize For Film. According to the press release by The Better Angels Society, the “Better Angels Lavine Fellowship” honors “promising filmmakers who are telling stories that focus on America’s diversity. The Fellows are selected from the pool of applicants to the Library of Congress Lavine/Ken Burns Prize for Film who demonstrate significant potential.”

The documentary premiered at the Middlebury New Filmmakers Festival in August and was screened at the New Orleans Film Festival on November 5. That showing generated feature stories in The Times-Picayune and Louisiana’s Country Roads Magazine. Sacks also discussed the film on listener-supported WWOZ 90.7.

Learn more about the Journalism and Media Studies major and department on the Rutgers School of Communication and Information website.

Top: Sacks and Raymond Anthony Myles at the New Orleans Jazz and Heritage Festival in 1994. Credit: Photo by Syndey Byrd.