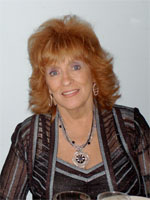 Betty J. Turock is Professor and Associate Dean Emerita at Rutgers University, where for 22 years she was a member of the faculty of the School of Communication, Information and Library Studies. For eight years she was Director of the master’s program and Chair of the Department of Library and Information Science. During her tenure the program was named among the top ten in North America by U.S. News and World Report, a rank it continues to maintain.

Turock is a Past President of the 68,000-member American Library Association (ALA), the oldest and largest library association in the world. As President she traveled over 300,000 miles and testified on more than a dozen occasions before the Congress and the Federal Commission on Communications (FCC) to focus the interest of the people of the United States on Equity on the Information Superhighway, just and equitable access to electronic information for all people of our nation and the nations of the world. During her presidency among the accomplishments of which she is most proud is the creation of the Spectrum Scholarship Program, which to date has educated over 700 diverse students as librarians.

Prior to her elections as President Turock served in a number of elected leadership positions within ALA, including as a member of the Executive Board and the Council, the Association’s legislative assembly. Before entering the world of academe, Turock held management posts across the United States in school, public and academic libraries. She served as Assistant Director, then Director of the Montclair, (NJ) Public Library, Assistant Director of the Rochester and Monroe County Library System, head of extension services at the Forsyth County (NC) Library System, and school media coordinator in the Alhambra School System, Phoenix, AZ and the Holmdel (NJ) School System. She was also senior advisor in the U.S. Department of Education, Office of Educational Research and Improvement, Library Programs.

Turock was the founding editor of the award-winning Bottom Line: A Financial Magazine for Libraries. Among her books, Serving the Older Adult was referred to as the definitive resource in the field. She is also the author of Evaluating Federally Funded Library Programs, released by the U.S. Department of Education, and with Andrea Pedolsky, Creating a Financial Plan. Her book, Envisioning a Nation Connected: Librarians Define the Public Interest in the Information Superhighway, was published by ALA.

Turock is listed in Who’s Who in America, Who’s Who of American Women, and Who’s Who in the World. She received the ALA Jesse Shera Award for Outstanding Research in 1989 and is the recipient of the 1994 Distinguished Alumna Award from Rutgers, the 1995 New Jersey Library Leadership Award, the 1997 Rutgers Presidential Award for Distinguished Public Service, and the 1998 ALA Equality Award. In 2000 she was honored by ALA as one of the Extraordinary Library Advocates of the Twentieth Century. At the 2006 ALA annual conference she received the Lippincott Award bestowed by the Association for distinguished service to the profession of library and information science.  In 2011 she was named Distinguished Alumna for the Social Sciences by the Rutgers Graduate School.

In 2012 ALA conferred on Turock the highest honor the association bestows, Honorary Membership, "for contributions so outstanding that they are of lasting importance to the advancement of the field of library and information science."