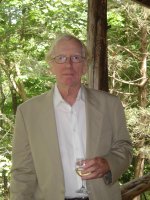 Born and raised in the Netherlands, Hendrik Edelman has had careers in international publishing and bookselling (Martinus Nijhoff, The Hague) and academic librarianship at Vanderbilt and Cornell. He became University Librarian at Rutgers in 1978 and in 1985 he joined the faculty of Rutgers’ Department of Library and Information Science. After his retirement in 2002, Edelman taught for several more years a graduate seminar on the history of the book in America, at the Palmer School of Library and Information Science’s rare books program in New York City. He and his wife, Antoinette M. Kania (Rutgers BA, MLS, Ed.D) now live in New York City, participating in and enjoying the many cultural opportunities.

Throughout his career Edelman has written and edited several books and published numerous professional and scholarly articles in the areas of academic library collection development, scholarly and scientific publishing history and Dutch-Armerican studies.