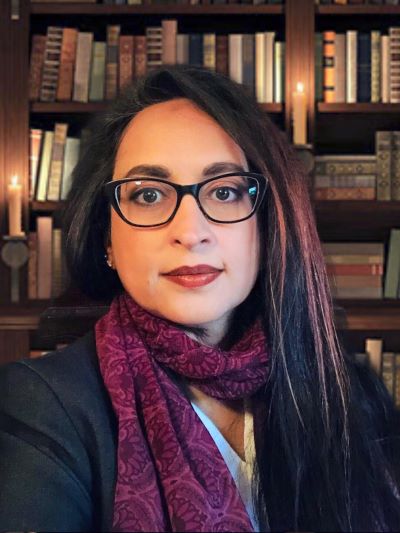 Deepa Kumar is an award-winning scholar and activist. She is the recipient of the Dallas Smythe award for her engaged scholarship, the Georgina Smith award for her work on gender and race equity, and the Marilyn Sternberg award for her leadership of the Rutgers AAUP-AFT faculty union. She is the author of more than 75 publications including books, journal articles, book chapters, and articles in independent and mainstream media. She is recognized as a leading scholar on Islamophobia both nationally and internationally. Her book on Islamophobia has been translated into five languages; a second and completely revised edition will be published in Sept 2021. She is also part of the Media Education Foundation‘s series on media, culture, and the Middle East along with Edward Said and Jack Shaheen. She is affiliated faculty in the Depts of Women and Gender Studies and Sociology and with the Centers for Middle Eastern Studies and Race and Ethnicity.

Deepa Kumar's research centers on Islamophobia, empire, gender, race, neoliberalism, labor, social class, culture and media. Her first book, "Outside the Box: Corporate Media, Globalization and the UPS Strike" (University of Illinois Press, 2007), is about the power of collective struggle in effectively challenging the priorities of neoliberalism.

Kumar holds that if neoliberal globalization characterizes the economic logic of our age, the “war on terror” has come to define its political logic. She began her research into the politics of empire shortly after the tumultuous events of 9/11. Her second book, "Islamophobia and the Politics of Empire" (Haymarket Books, 2012), looks at how the “Muslim enemy” has historically been mobilized to suit the goals of empire. The book has been translated into five languages. Verso is publishing a second and completely revised edition of this book in 2021. Her third book project titled "Terrorcraft: Empire, Security and Race" and explores how political violence, racism and security practices come together.

Kumar is a much sought out public intellectual who has shared her expertise in numerous media outlets such as the BBC, The New York Times, NPR, USA Today, Telesur, the Danish Broadcast Corporation, and other national and international media outlets. She has given over 200+ media interviews.

Fertile Crescent Project Grant on women and art in the Middle East, Institute for Women and Arts, Rutgers University, 2012-2013 (included in the NJCH grant proposal as an expert, $9000)

Kumar, Deepa. Islamophobia and the Politics of Empire (Haymarket Books, 2012). Being translated into Arabic, Turkish, and Malayalam.

Marilyn Sternberg Award, American Association of University Professors (AAUP), for her "bold vision" and "courage" in leading the Rutgers AAUP-AFT as its president.