Jon Oliver Carries the Gonfalon at the Inauguration of Rutgers President Jonathan Holloway
Jon Oliver, who is assistant dean of information technology at SC&I and chair of the Rutgers University Senate, carried the Gonfalon while leading the procession to the stage.

After 16 months in office, Jonathan Holloway was officially inaugurated as the President of Rutgers, the State University of New Jersey, in a traditional ceremony held at Jersey Mike’s Arena (formerly known as the RAC) on November 5, 2021 at 2 p.m. Holloway’s installment ceremony had been delayed for months because of health concerns arising from the COVID-19 pandemic.

While likely thousands watched via livestream (the in-person ceremony was by invitation only), SC&I Assistant Dean for Information Technology, Rutgers University Senate Chair, Rutgers alumnus, and current Ph.D. student Jon Oliver carried the Gonfalon and lead the procession, including Jonathan Holloway, New Jersey Governor Phil Murphy, Rutgers faculty and staff members, and others, to the stage.

“I was deeply honored to help celebrate President Holloway's Inauguration,” Oliver said.  “I have worked with him since his presidency began.  He is a scholar, leader, and caring human being.  He truly aspires to build the Beloved Community and has inspired us to help him.”

Oliver said he was chosen to carry the Gonfalon because whomever holds the office of chair of the Rutgers University Senate when a new university president is inaugurated fulfills the role of the University Gonfalonier. The Senate Chair also carries the Gonfalon at university commencement. 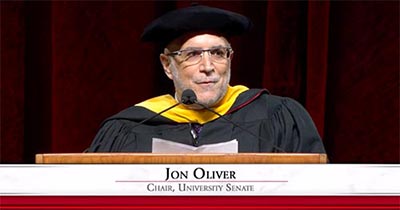 In his address, Oliver said, “It is my singular honor and privilege to be here today at this Inauguration to congratulate President Jonathan Scott Holloway on behalf of the Rutgers University Senate.  From the day I met President Holloway in January 2020 before he began his presidency, his first words were in effect, ‘you and I are going to work together a lot.’ President Holloway, you have kept your word, and valued shared governance, every day.  You have been a partner to the Senate, have heard our thoughts, answered our questions, and embraced our communities.

“I have seen your distinguished scholarship, read many of your speeches, and watched your interaction with University Senators and how you communicate with all the Rutgers communities. I see how devoted you are to listening to faculty, staff, students, PTL’s and alumni and how you take the time to acknowledge their issues and how you work tirelessly on behalf of all of us.

“While writing this, I reflected on your leadership and I thought of the words of Ralph Ellison, 20th-century scholar best known for his book ‘Invisible Man.’ Ellison said, in part: ‘I am invisible, understand, simply because people refuse to see me...When they approach me, they see only my surroundings, themselves or figments of their imagination, indeed, everything and anything except me.’

“Your humanity, President Holloway, is not invisible to us, and we have come to see that no one is invisible to you.  I have seen that in all you do and everything you say.  You see the Beloved Community in all of us. You value us and you lift us up.  I know your Presidency began with that fundamental premise and will continue that way, unabated.

“Your humanity, President Holloway, is not invisible to us, and we have come to see that no one is invisible to you."

“Again, on behalf of the University Senate, I give you my heartfelt congratulations, and I promise we will do our best to help you build the Beloved Community you aspire for us to create.  We will rely on your wisdom and your humanity to lead us to build it together.  Thank you, Mr. President, and congratulations.”

Discover more about the Rutgers School of Communication and Information on the website.