Julia Palazzo JMS ‘16 Succeeds in Multifaceted Role at Nashville’s WKRN News
“My education at SC&I prepared me to enter the real world.”

Just five years after graduating from SC&I, Julia Palazzo JMS’16 has proven she has the mettle to handle a multifaceted job in the world of broadcast news. A reporter, host, anchor, and producer currently reporting for WKRN News 2 in Nashville, TN, she’s taken the time to share with SC&I her educational and career path.

SC&I: How did you come to choosing the JMS program at SC&I and how did it prepare you for a career in broadcast journalism?

JP: I am a proud Jersey girl but initially decided to go out of state for college to experience a new area. I enrolled in the University of Massachusetts-Amherst and loved every minute of it. But, after taking an introductory Journalism course, I knew that was the path I wanted to pursue. Sure, I was near a big city (Boston) that had plenty of opportunities to learn. However, I realized I would have more significant resources and stronger journalistic connections if I could intern in New York City. I made the difficult decision to leave and transfer to Rutgers. I haven’t looked back since.

I got involved right away by joining a sorority on campus and eventually becoming vice president. I applied for a job at RU-tv, broadcasted news on WRSU 87.7 Rutgers Radio, and looked for every professional opportunity possible in the real world. I committed to majoring in Journalism right away and met with campus icon Professor of Professional Practice Steve Miller. He knows everything and everyone (and he’s so humble, he would never admit to any of that). As an extra security blanket, I also decided to take Political Science courses (i.e., American Foreign Policy). Eventually, I decided to make it my second major. My SC&I courses included Broadcast News Writing and Reporting, Television Reporting, and Media Ethics and Law, which are essential if you want to pursue broadcast journalism. I learned most of my skills by working at RU-tv and interning, but these courses also help support the craft.

My education at SC&I prepared me to enter the real world. Each professor invests time and interest in their students’ futures. They want us to succeed and encourage us to come to them for advice. Many journalism courses include hands-on elements, which makes you feel like you’re already working. For example, in TV reporting, we had to put together several newscast stories throughout the semester. Fast forward to now, and this is something I am required to do multiple times a day.

SC&I: What advice to you have for current students?

JP: My advice would be to never stop learning. Always be a sponge and ask questions. You never know who knows who or when an opportunity is just a knock away. I completed five internships as an undergraduate. There were many times where I had to sacrifice fun days at the beach with friends, but I have no regrets. It all paid off. I graduated with honors in May 2016 with two degrees and started my first job on air less than two months later.

I can’t imagine being an undergraduate during this pandemic, the darkest and most challenging era in our lifetime. I commend every student for never giving up and still chasing after their dreams and degrees despite not having the typical college experience. I look back on my college years with a smile. Four years go by faster than the speed of light, and every moment is precious. Keep pushing. Keep studying. Keep smiling! And keep making special memories as a Scarlet Knight. I would be happy to connect with students, regardless of what career they pursue.” 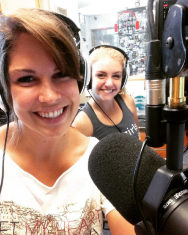 SC&I: What would you tell someone pursuing a career as a reporter?

JP: If you want to be a television news reporter, first and foremost, you need a reel, a compilation of clips of your most robust reporting. I spent the first few   weekends of my last semester going out with a camera and filming interactive standups I wrote. Before having a final product, I had several drafts of my reel. My   mentors, including my internship supervisor at NBC News (also a Rutgers graduate), reviewed each one. Once I felt confident, I sent my video and resume to   different stations everywhere and anywhere from California to South Dakota to Texas. I also filled out an application on each company’s website. A few weeks   before graduation, I started getting phone calls and eventually got a call from a station in South Bend, Indiana. It was market #99 (out of more than 200 in the   country), which is considered a very good spot for a post-grad to score a gig. I chose South Bend. I followed a similar process for my following two jobs in Dayton,   Ohio, and now Nashville,Tennessee. I had former colleagues that knew people at both stations, which helped my work get noticed in a big pile of applicants. But, I   still had to send my resume, reel, and, most of all, prove that I was the perfect candidate for the position.

SC&I: What role did networking play in you landing your dream job?

JP: I can’t say enough about the importance of networking. Never burn a bridge because the television business is MUCH tinier than you think. I’ve worked at   three stations, and that was enough to help me meet several people who are now all across the country. Colleagues in small markets move up too. That person you shared space with or handed off an SD card of footage could be the key to your dream job.

My current position demonstrates the importance of networking. I immediately fell in love with Nashville when I first visited, and I only dreamed of having an opportunity to work there. Fortunately, my news director at my former station in Dayton, Ohio, worked closely with my current news director at WKRN in Nashville a few years ago in Indianapolis. I applied for the Nashville job on my own, and she offered to put in a good word because she saw how hard I worked during my two years in Dayton. When the station hired me, I, in turn, recommended Rutgers alumna Emily Gibbs JMS’17 for “Living Dayton,” as I knew she would be an excellent choice. We, along with Steve Miller, were thrilled when Emily got the job. Make sure you are in everyone’s good graces, and you’ll make some lifelong friends along the way while you’re at it. I think this applies to any career.