Metrics Expose Tension in Journalism Between the Profit Motive and the Democratic Imperative
A new paper by Assistant Professor Caitlin Petre explores the impact of metrics on the media industry and journalistic practice, and on the tensions embedded within a democratic institution that also needs to make a profit.

Update July 9, 2021: Caitlin Petre's new book “All the News That's Fit to Click, How Metrics are Transforming the Work of Journalists”  is available to pre-order now.

“Metrics are a new patch of terrain on which the tension that exists in journalism between the profit motive and the democratic imperative is fighting itself out. So that makes them really important to understand,” Assistant Professor of Journalism and Media Studies Caitlin Petre said, explaining the findings in her new paper “Making Peace with Metrics: Relational Work in Online News Production.”

Co-authored with Assistant Professor Angèle Christin of Stanford University, the paper explores the impact that metrics have on the media industry, the ways analytics influence journalistic practice, and how journalists cope with the tension between the need for a stable, healthy, democratic press that is also a commercialized, profit-making enterprise.

“This paper is a way of confronting these issues, and it is important to have this conversation,” Petre said. “This is a time, especially for local news, that the peril of having a heavily commercialized media system are very, very evident. Newspapers ran high-profit margins for decades, and during that time it was easy to avoid confronting the conflicting role of media companies as both civic organizations and commercial businesses. But now we have to confront it.”

When metrics were first introduced into newsrooms over a decade ago, Petre said, journalists feared this new ability to analyze traffic would threaten their integrity as professional journalists by forcing them to write only “click bait” instead of covering the issues they cared about.

“There was a lot of anxiety in newsrooms about metrics because of the possible impact of analytics on the quality and civic value of journalism. Over time, however, journalists have moved from fearing analytics to largely accepting them as part of what it means to do journalism in the digital age,” Petre said. “This paper grew out of an attempt on our part to help discover how and why that shift took place. We wanted to understand the specific changes in newsrooms during the last ten years that have caused the shift from perceiving metrics as extremely threatening to journalistic professionalism and integrity, to something that is now largely taken for granted in newsrooms, and why this transformation matters.”

Petre said she and Christin approached their research by applying the work of Viviana Zelizer, the Lloyd Cotsen ‘50 Professor of Sociology at Princeton University, who is a world-renowned scholar in the field of economic sociology. “Zelizer was one of the first scholars to challenge the prevailing theory that social, emotional, and moral life are completely separate from economic life. There was an idea that once money is introduced into emotional relationships, it’s a corrupting influence on those relationships or social ties. She called this prevailing idea the ‘hostile worlds’ theory,” Petre said.

“Zelizer said, these aren’t ‘hostile worlds’ at all.  Money and emotion and money and social ties are enmeshed, and what allows them to be enmeshed is something called ‘relational work’ or ‘matching.’ This is the notion that when you mesh culture and the economy, you need to do some work to make those two things compatible. So Angèle and I thought, perhaps there is a way to understand the acceptance of metrics in newsrooms using this concept of ‘relational work.’ Maybe over the past decade, forms of ‘relational work’ were carried out within media companies with the objective of making metrics seem not threatening, not corrupting, not contaminating, to journalism. Our paper takes Zelizer’s basic framework of relational work and applies it to metrics and online news production.”

Petre and Christin identify what they call five ‘relational strategies’ to show the ways analytics companies and editors have tried to create a sense that there is no tension between clicks and journalistic value.

One of the reasons they saw a parallel between Zelizer’s work and newsrooms, Petre said, was that in the early years of metrics in online newsrooms, they noticed evidence of a ‘hostile worlds’ perspective in newsrooms.

“This was the notion among journalists that on the one hand, there are journalistic values and newsworthiness, and on the other hand, there are clicks and metrics, and those two are fundamentally at odds,” Petre said. “The way this was often framed was ‘the more successful a story is at generating traffic, the less news or civic value it has.’ And conversely, ‘the more important an issue is to cover – the more civic value it has – the less traffic it will get.’ In other words, there was an idea that the public is not sophisticated, and they want to read garbage.”

However, a change occurred when analytics companies such as Chartbeat, and some news executives and editors, worked to make the case that traffic and journalistic values are not ‘hostile worlds,’ that they actually can be in alignment with each other, as long as news is analyzed using the right metrics. One of the relational strategies Petre and Christin explore in the paper is the drawing of moral boundaries that distinguish between good and bad metrics.

“Newsrooms evolved to believe it wasn’t that metrics are inherently bad for journalism, it was that they had been looking at ‘bad metrics,’ like clicks. If they looked instead at ‘good metrics,’ such as time spent – or how long people spent reading an article – then metrics would reveal a complete alignment between news value and metrics. Such a belief wasn’t necessarily entirely accurate, but it made metrics easier for many journalists to stomach.

While their research shows that journalists have largely learned to adapt to metrics, there are still situations when metrics are perceived as threatening, Petre said. That’s why the need for media companies to do ‘relational work’ is so important.

“There were a couple of cases in the organizations Angèle and I studied where new owners of a media organization came in and made no effort to play down this tension or to make metrics seem unthreatening. Instead, they said things like, ‘we want to quadruple page views to our site in the next four months.’ In those instances, when new owners put out a blunt traffic target without performing this kind of relational work to make the case that quadrupling page views is compatible with journalistic values, journalists revolted. In one of the publications I studied, the entire staff quit en masse in part because they were so enraged by the traffic demands their new private equity owners made.” 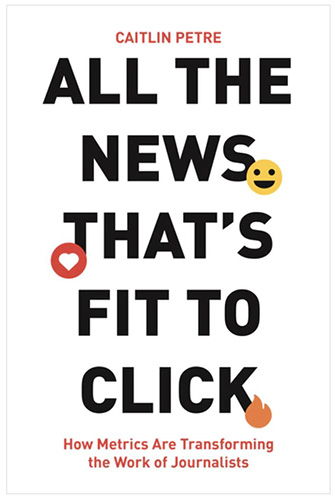 The profound instability of a career path in a news media industry has also contributed to a fear of metrics that remains, Petre said. “It’s not just that metrics are available at that individual level where they weren’t before – it’s that they are available now when journalists fear losing their jobs. That threat constantly hangs over them. The combination of those two forces - metrics plus job precarity -- are a perfect storm that makes metrics more prominent and anxiety-inducing.”

Metrics have also changed the rhythms of news production, Petre said, contributing to and intensifying production pressure, a troubling new development which Petre says she covers in-depth in her forthcoming book, “All the News That's Fit to Click, How Metrics are Transforming the Work of Journalists” published by Princeton University Press and due out in fall 2021.

“I wouldn’t say metrics have entirely caused this pressure because I think other, bigger factors have caused it too,” Petre said. “But it is evident that metrics have created a constant intensifying output pressure – a new need for journalists to constantly put out new content. I think the platforms really reward novelty, and in a sense, there is a limited amount of traffic. Audiences and the amount of time those audiences can spend on media are limited, and each news outlet is trying to grab as much of both as they can.”

Petre noted that the tension in media companies between serving as democratic institutions and being profit-making businesses is not new. She said that in the 1970s, the New York Times created new sections such as home and garden and the style section in order to capture advertising revenue that could subsidize other coverage, such as the work of foreign bureaus.

“Metrics are just the latest chapter in this longstanding tension in the U.S. news media between being a commercial industry on the one hand and being a democratic institution on the other. For me, that’s the defining tension in the U.S. news media. Metrics are a particularly vivid and particularly contemporary manifestation of that tension, but the tension is not new at all.”

More information on the Department of Journalism and Media Studies is on the Rutgers School of Communication and Information website.