NJ Society of Professional Journalists Awards Part-Time Faculty Member Leo Sacks for Writing Excellence
Sacks, a seasoned journalist, Grammy Award-winning music producer, and part-time lecturer at SC&I, has won an award from the Society for his essay, “My Father, My Son.”

The New Jersey Society of Professional Journalists has named Leo Sacks, a part-time faculty member at SC&I, the recipient of an award for writing excellence. Sacks, who has taught the courses Writing For Media and Music Journalism at SC&I since 2015, was recognized for his essay, “My Father, My Son.”

“I wrote the piece last summer as we took our first, tentative steps back into the sunshine,” Sacks says. “It began as a meditation on parenting but turned into a celebration of time. That, time takes time and that we have to give time, time.” 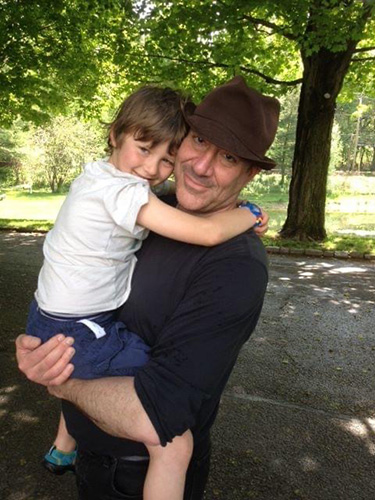 Sacks will receive the award at the organization’s Awards Gala Dinner which will be held on July 28, 2021, at the Harvest Moon Brewery and Café in New Brunswick and will honor journalists in several categories for their work in 2020. A lifetime award will also be presented to the event’s keynote speaker, NJ State Senate Majority Leader Loretta Weinberg, D-Teaneck, “for her lifetime of commitment to a free press.”

Sacks has had a long and varied career as a journalist and a music producer. He has been a reporter, editor, broadcast news producer and freelance writer at the highest echelon of mass media (Billboard, CNN, NBC Nightly News, CBS News, The New York Times Book Review, People, the Village Voice).

He has also enjoyed a successful career as a producer for Sony Music. He has collaborated with Aretha Franklin, Luther Vandross, Earth, Wind & Fire, the Isley Brothers, and the producers Kenny Gamble and Leon Huff of Philadelphia International Records to preserve their musical histories and bring them to a new generation. In 2014, he won a Grammy Award for compiling Bill Withers: The Complete Sussex & Columbia Album Masters.

Sacks is currently writing and directing a documentary about Raymond Myles, the New Orleans gospel sensation who was murdered on the cusp of music stardom. The project has already been featured in The New York Times. He hopes to teach a new course in Digital Storytelling at SC&I in Spring 2022. 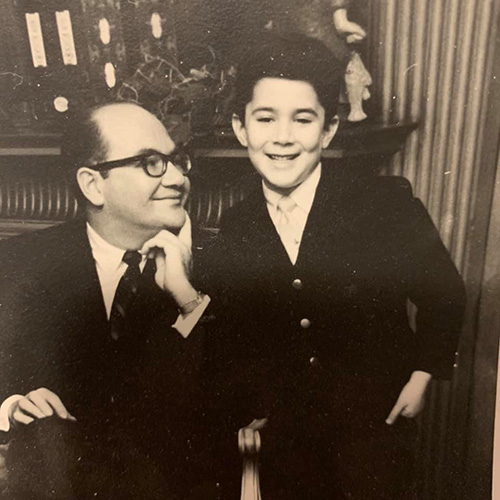 “A shout-out to the intrepid students that I taught during the pandemic,” he adds. “When we switched to remote learning, they were anxious, uncertain, vulnerable. And I could relate. Quite a number had lost family or friends. But we turned our fears into faith. I will always be grateful for this teachable time.”

Discover more about the Journalism and Media Studies Department at the Rutgers School of Communication on the website.

MY FATHER, MY SON

My son Theo pulls a milk chocolate Easter egg from his pocket. Sunlight splashes on the gold foil as it falls to the ground.

"A motivational treat," he says slyly.

It's a brisk spring morning in the lower Hudson Valley. We put a leash around our wily mix of pug, spaniel and Portuguese water dog. His black hair is thick and furry, like a bear's. He pulls me like a runaway train as we march like musketeers along narrow, wooden planks overrun with swampy wheat grass.

The air is fresh and cold. I point to the tall pines, flooded by florescent light.

"All I can smell is my chocolaty breath." His apple cheeks belong in a Chagall.

It's our first trek after six weeks of sheltering. The earth is soft, like mother's cheek. The musty smell is stirring: I want to hug the ground. We step over beds of lime green moss and patches of leafy forest cabbage. Mating calls of springtime fill the rushing wind. The Japanese call this shinrin-yoku: forest-bathing.

I am transported, into a lucid dream. Here, now, is an apparition of Dr. John. He's wearing voodoo beads and Mardi Gras Indian feathers. A hand-carved walking stick, studded with rubies and gem stones, accentuates his gangsta lean. He used the healing powers of this same walking stick to chase away the bad spirits in the Crescent City when the levees failed after Katrina. Now I am using those healing powers to alleviate the suffering in my own, grievously wounded New York City.

In my lucid dream, there is no heartbreak, no sorrow, no darkness. Only...

But the spell is broken. Silently, dramatically, two runners have surprised us, emerging from an unseen world, soaked in sweat and steam. They’re close enough for us to touch. And my heart is racing with them.

They are not masked, these otherworldly stick figures. But neither are we. Nature is supposed to protect us.

"Where's your common courtesy!?" Now Theo is furious. At me.

"Dad! You frightened me!"

I get it. He's on edge. He's missing his teachers. He's missing his friends. He's wondering whether he's properly prepared to start middle school in the fall. In cyberspace, he can clock 180 mph in a sleek Lamborghini. But there's nowhere to run from Covid-19. He knows that the virus is relentless.

I want him to see the breadth and scope of the pandemic: the institutional failures; the emotional hardships; the sacrifices; the root reasons for the disproportionate deaths; the grieving for loved ones without a proper goodbye.

When he can't, or doesn’t, I have to remind myself that he is 10 years old.

Theo’s eyes are green, brown and soulful. He has his mother's Scandinavian features and my native New Yorker's moxie. We share the best of our values, heritage and culture with him. We're teaching him to see the world out of wonder. To hallow
the everyday.

When he arrived, sweet and embraceable, we put his changing table next to my jukebox. In the glow of the flashing colored lights, I brought his tiny, matchstick arms together as we clapped along, ever so delicately, to Wild Cherry's ecstatic "Play That Funky Music."

"White boy/
Lay down the boogie/
And play that funky music/
'Til you die.”*

Theo did not see the urgent outpouring of grief and violence that has followed the death of George Floyd. We do not own a TV. We get our news and information from public radio. He knows there have been weeks of demonstrations against racial injustice and police accountability.

"Has your teacher discussed the protest movement?" I wonder.

"It's too mature for the class," he says.

He sounds defensive. Perhaps he knows that his father has already asked.

"Normally, we'd be all over it in class, in a heartbeat," his teacher writes back.

Which becomes a teachable moment for me: the challenges of discussing race relations during a health emergency through remote learning -- when some students are already so vulnerable -- escape me.

But the world keeps on spinning, and my son has searing questions. "Why aren't there any black people where we live?"

"Why are people racist?"

We talk about the history of the pain that is fueling the protests. We talk about white privilege. About the need for transformation and societal shifts.

"We live in two separate Americas," I say. "We're trying to figure out who we are. We've got a lot to face before we can start to fix things."

Theo is thoughtful enough to recognize the symbolism of an oppressor's knee. He is mature enough to learn about lethal injustice. He is sensitive enough to appreciate the emotional gravitas of the conversation.

My answers come slowly, like an unspooling film, one frame at a time. But I do not have the words to describe what it feels like to be dehumanized.

I've weened Theo on "my" music: snappy, gospel-funk by the Ohio Players; songs of solace by Mahalia Jackson; gentle affirmations by Curtis Mayfield; psychedelic explosions by the Temptations; the supernaturalism of Ray Charles.

But he has his own influencers: YNW Melly, Dababy, Lil Mosey, Lil Tecca, the Kid Laroi, ASAP Rocky, Roddy Ricch.

"They mesmerize me," he says.

I tell him about my friend Bill Withers. How he waited until he was seasoned enough to have children.

It's bittersweet but beautiful to hear him say.

"Bill often said, 'Love is a good teacher.' And here you are."

He wants to know whether drugs contributed to the premature death of Juice Wrld, his hip-hop hero, last year at age 21.

In a delicate vibrato, he begins to sing the melancholy “Lucid Dreams":

"I still see your shadows in my room/
Can't take back the love that I gave you/
It's to the point where I love and I hate you/
And I cannot change you so I must replace you."**

“His name was Jarad Higgins," Theo says. "He had heart problems. He took opioids. His girlfriend dumped him. I think I know some of his feelings. But why would someone who achieved greatness at a young age want to do drugs?"

Theo has always been fascinated with the stars. Lately, he says he wants to be an astrophysicist. He built a Hubble telescope from the hundreds of LEGO pieces that swallow up his bedroom floor.

"It's my tribute to Stephen Hawking," he says.

Also, he wants to be a quarterback in middle school. There's poetry in the way his passes sail through the air, the laces twirling like the star of a ballet, and fall into my outstretched hands. He knows about the risks: how degenerative brain disease begins with repeated blows to the head; how defenders will toss a quarterback like a rag doll. But what about the rewards?

His voice trails off.

"Why are you stepping on my dreams? Seventh grade is not the NFL."

My own father was too busy to play catch. He was a clinical psychologist who practiced in our home on Manhattan's Upper West Side. I'd greet his patients at the front door when I came home from elementary school. I served them snacks. I knew their problems.

There was the Holocaust survivor who could not stop eating. The ruggedly handsome son of a construction magnate who could not tell his father that he was gay. The woman who insisted that someone was changing the clothes in her closet because her dresses were suddenly too tight. The parish priest who had romantic feelings for his secretary but had convinced himself that the reason his heart was fluttering was because he had arrhythmia.

I was just as vulnerable as they were: I had thick Coke-bottle glasses and a Buddha's belly. We'd make small talk until, finally, my father arrived. Most days, he was shopping for clothes.

There were no boundaries to protect me -- from the patient who knocked on my bedroom door, because he wanted a new roll of toilet paper; to the man who threatened my father's life. Was he going to kill me, too?

"Leo," my father said, chuckling, "he carries a silver flute in a shopping bag."

My life at 10 years old was utterly inscrutable.

I'm not sure why we stopped celebrating our responders at 7 p.m. Banging a metal spatula against a skillet, I felt the goodness of angels in our garden. My son blew a plastic orange whistle. A tuba rumbled next door. I took in the harbingers of hope and renewal: bell-shaped fritillaria; pink bleeding hearts; dainty blue scilla. I felt the spirit of my parents, who survived the Great Depression. I imagined a ticker tape parade wending its way through the Canyon of Heroes.

At bedtime, I wonder whether our lives have turned upside down for a divine reason.

I cup my hand on my son's forehead. He's had headaches and low-grade fever.

"Do you think I have the virus?"

"Hard to know without a test."

"Scientists call us kids the 'super-spreaders.'"

He looks at me for reassurance.

"You're gonna be fine," I say, reaching for the light.

I apologize to Theo for scaring him during our walk in the forest.

"I understand. You were trying to protect us."

"But I don't understand these times."