“Bathtub Madonnas” Reveal the Dynamics of Urbanization, Modernity, and Italian Migrant Experiences in the U.S.
In newly published research, Associate Professor Regina Marchi shows that homemade yard shrines of the Virgin Mary, which can be seen in many Italian American neighborhoods, represent much more than religious significance to their owners.

We’ve all seen shrines in the front yards of homes in American neighborhoods: statues of the Virgin Mary, placed inside arched, rounded forms made of porcelain or metal. Colloquially known as “Bathtub Madonnas,” these shrines can sometimes be covered with beautiful flowering vines or placed in small gardens.

When and how were these shrines first constructed, why did people create them, and what did they mean to the people who created them?  As communities change, what do they mean to people today?

These are a few of the questions Associate Professor of Journalism and Media Studies Regina Marchi sought to address when she began researching the origins and cultural meaning behind these homemade shrines. She wrote about her findings in the paper “Bathtub Madonnas as Media in an Italian American Neighborhood in Transition: Migration, Gentrification, and Meaningful Properties” which was published in Visual Communication Quarterly on March 10, 2021. Prior to her paper’s publication, Marchi received an award for her work at the 2020 International Communication Association Conference, where it won the Top Faculty Paper award in the Division of Visual Communication Studies. 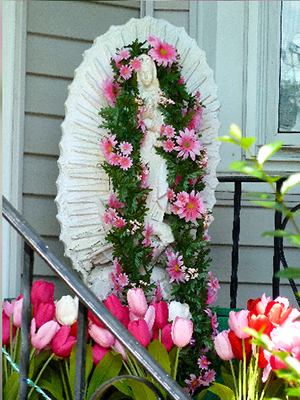 Explaining her motivation to conduct this study, Marchi said, “I wanted to see what bathtub Madonnas might reveal about dynamics of urbanization, modernity, and migrant experiences in the U.S. and about how urban communities negotiate space, change, and conflict.”

Her findings, based on visual analysis and more than 30 interviews, show “these front yard shrines, most of which were erected from the 1930s to the early 1980s, were more than expressions of religious faith. They were proud markers of homeownership (The American Dream) and cultural identity during the first half of the 20th century, when Italians were racialized as non-white and faced great discrimination,” Marchi said. This explains why people usually placed these shrines in public-facing front yards, rather than private back yards, she notes.

Bathtub Madonnas earned their name because of the way many of them were constructed. “The tradition of creating protective shelters to cover saint statues has been common in Italy since medieval times,” Marchi said. “But the unique creation of bathtub shrines in the U.S. started after World War II, when vastly improved economic conditions allowed working class immigrant homeowners to remodel their bathrooms and install modern showers. Discarded cast iron ‘claw foot’ tubs were heavy to move and difficult to sell. With the ingenuity typical of immigrants, Italians repurposed these tubs into saint's shrines for their yards. They partially buried their pre-WWII bathtubs vertically into the ground to form an arched recess around statues. ‘Bathtub Madonnas’ can be seen in Italian-American homes across the U.S., including here in NJ and in the tri-state area.”

To learn more by speaking to people who own bathtub Madonnas, Marchi decided to go to one place she knew she could find front yard shrines: her hometown. “I grew up in Boston’s largest Italian neighborhood, so I always saw these shrines in front yards,” Marchi said. “My family didn’t have one, but neighbors did. I often wondered why the statues were inside bathtubs. I thought it was a bit odd but took it for granted as part of the landscape. As a child, I was struck by how many plants and flowers – such as arches of wisteria or roses, surrounded these shrines. These were glimpses of ‘green’ in a tightly-packed city neighborhood that had no parks at the time. Like the rest of Boston, the neighborhood has now become gentrified and today there are gorgeous parks, but when I was growing up there in the 70s and 80s, it was a lot of cement, few trees and very few flowers. For me, these shrines stood out more for their horticulture than their religious meaning.”

Today, Marchi said the once predominantly Italian American neighborhood of East Boston where she grew up has become one of the largest Latinx neighborhoods in Boston, and it is now being rapidly gentrified as developers build luxury condos and hotels. “As the neighborhood dramatically changes, I’ve been thinking of bathtub Madonnas as a kind of community archive and diasporic media and I wanted to photograph them before they disappear.”

To determine where she should canvass in her former neighborhood, “I first created a map of East Boston homes with Madonna shrines in front,” Marchi said. “I then started knocking on doors to talk to people about the shrines in their yards. A few people thought I was weird and wouldn’t open their doors. More often, people seemed delighted to speak with me. Several invited me inside for cookies or a bottle of water (I did the interviews during a heat wave!).”

Her interviews, Marchi said, revealed that these shrines are “examples of vernacular media,” that represent certain longstanding community values while simultaneously raising ambivalence with other value systems such as individualism, social mobility, racial-ethnic integration, and gentrification. They are “archives of community history for people of Italian ancestry and even for people who are not,” she observes.

“For many, they strike a nostalgic chord, reminding me of Arjun Appadurai’s writing on how modernity can conjure nostalgia for places and periods 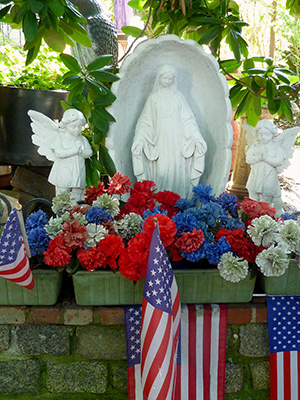 – even if they are not personally experienced by someone – a longing for a sense of community believed to be lacking in the present. Therefore, meanings of bathtub Madonnas today depend on who is viewing them. They may be seen as expressions of religious faith, cultural identity, community history, or even kitsch.”

Marchi is sharing her research methods and findings broadly with students at SC&I. Last month, the article was assigned in the “Critical Research Methods” Ph.D. course at SC&I, taught by  Professor of Library and Information Marija Dalbello, as part of a unit on visual analysis and ethnographic methods. Marchi also gave a guest lecture in the class.  She is also planning to incorporate this research in her own “Gender, Race and Class” course when discussing media, ethnicity, and the social construction of race.

Students beyond SC&I will also benefit. “Although it’s only been published for a little over a month, the article is already being used in a ‘Media and Social Change’ course at Northeastern University and in a ‘Communication, Community and Development’ course at Gonzaga. It has relevance to courses in Communication, Visual Media, Urban Studies, Migration, Anthropology and Cultural Studies,” Marchi said.

This summer, Marchi will share her research with the general public by conducting talks on the subject at public libraries, and a shorter version of the article will appear in the Fall 2021 issue of Primo, the largest circulation U.S. magazine about Italian-American culture and history.

More information about the Journalism and Media Studies Department at the Rutgers School of Communication and Information is on the website.