Could Your Avatar Shake Hands? Attending an Academic Conference in the Metaverse
Professor John Pavlik and doctoral student Shravan Regret Iyer, experts in experiential media, said their experience presenting research in the Metaverse for the first time “was unique and surprisingly effective.”

“The avatars definitely created a certain level of levity or enjoyment, since it felt as though we were living in an animated world,” Professor of Journalism and Media Studies John V. Pavlik said, describing the first time he attended an academic conference in the Metaverse.

Pavlik and his doctoral advisee, Ph.D. student Shravan Regret Iyer, presented their paper, written in collaboration with Professor Venus Jin of Northwestern University in Qatar,  “Understanding How Experiential Media was Utilized in Qatar 2022” at the Sixth World Summit for Tourism and Hospitality Conference held December 14-15, 2021.

As an expert in experiential media, including augmented reality and virtual reality, Pavlik said the experience “was unique and surprisingly effective.  Being within a virtual world and represented by an avatar, and then interacting with other people’s avatars, takes some getting used to, but I can see both some pros and cons.”

"The Metaverse will likely evolve in the months and years to come. Protecting user privacy and security and other aspects will be vitally important, and as will ensuring equitable access across all segments of society.”

He said hosting the event in the metaverse helped “fulfill the mission of the conference, not unlike in-person conferences, by enabling colleagues from around the world to meet in a conversational setting to discuss ideas and the like. I met a colleague from the Middle East, for example, who was interested in our research about experiential media (AR, VR) storytelling in Qatar about the upcoming FIFA World Cup to be hosted in Qatar in 2022.

“In light of the pandemic, we were not able to travel in person to meet with other colleagues, but having a virtual platform provides a valuable and effective alternative, though not a perfect one.  But it is a beginning. If we think about how other previous media have evolved, such as TV starting as low-resolution black and white, to today’s high-resolution large-screen color platforms, the Metaverse will likely similarly evolve in the months and years to come. Protecting user privacy and security and other aspects will be vitally important, and as will ensuring equitable access across all segments of society.”

Pavlik said the event reminded him of an immersive virtual reality game-type experience, but becauseconference participants were represented by avatars, it was quite different from conferences held virtually on Zoom. “This was certainly one of the biggest differences from the real, or physical, world.  Video and audio were also available in addition to text, so aspects of Zoom type interaction were also possible.  It was clear most people were engaging via avatar. Several dozen people/avatars were usually in the poster room at the same time, and this made for a lively space.”

Participants were able to create their own avatars, Pavlik said, because “the platform provided a template from which to easily create and customize one’s avatar.  Moving about was pretty easy and intuitive.  Participants saw on their device’s screen the virtual world, and they’d see their avatar within it. We’d move about by touching the arrow keys, or other tools.”

However, he said movement was limited. “We could not shake hands or have that level of subtle movement or gesture. That would be valuable in future applications in such a virtual conference environment. Participants were basically limited to moving near their posters and standing there.” 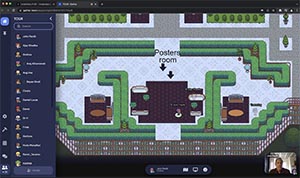 There were several ways the avatars could communicate. They could talk via text messages or chat or activate audio and then speak in their actual human voices and hear the other person/avatar that way.

A benefit of meeting in the Metaverse, Pavlik said, “was the potential to interact at any time with anyone else in the virtual environment.  We could always see who was there and easily move about from one location to another to talk with someone.”

There were also disadvantages, Pavlik said. “The platform reduced the potential for non-verbal communication. I think non-verbal is important in communicating with other scholars, even though you may need words for some of the higher-level communication about research ideas and findings.  But sometimes seeing the reaction on someone’s face can be very revealing and in this version of the Metaverse, this was not easily discerned.”

There are other ways the user or participant experience could have been improved as well, Pavlik said. These could include “providing other dimensions to the simulated environment, such as a reception where avatars could enjoy a beverage or a snack virtually and talk with other avatars in this relaxed setting.  This might facilitate further discussion.”

"A benefit of meeting in the Metaverse, Pavlik said, “was the potential to interact at any time with anyone else in the virtual environment.  We could always see who was there and easily move about from one location to another to talk with someone.”

Pavlik said while the platform added a bit more humor than usual to the experience of attending an academic conference, “Once people are accustomed to such a virtual world, I think the novelty will wear off and it will more about the actual communication or scholarship, and less about the nature of being an animated avatar.”

Overall, Pavlik said the experience did meet his expectations. “I was surprised a bit at how quickly one can adjust to existing in a virtual way, and to having virtual interactions, conversations in a digital environment,” Pavlik said.

Discover more about the Journalism and Media Studies Department at the School of Communication and Information on the website.