How Are Climate Science and Communication Connected? Lauren Feldman Explains

If you previously thought that the field of science has nothing to do with the field of communication and media, think again.

For a February 7, 2018 event co-sponsored by the School of Communication and Information (SC&I), titled “Communicating Science in a Post-Truth World," Rutgers invited five science journalists from outlets ranging from National Public Radio to The New York Times, to discuss the importance and implications of communicating science in a “post-truth” world.

Better communication of science is necessary, now more than ever. In this political climate of “post-truths” the public holds little trust in the media, which leads to difficulty understanding urgent scientific concepts like climate change.

“There’s an increasing need for scientists to be able to effectively communicate their research to a much wider audience,” said Associate Professor of Journalism and Media Studies Lauren Feldman. “I think scientists understanding how 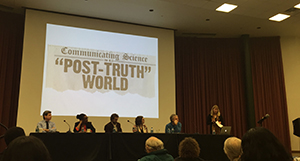 journalism works, and journalists better understanding how science works is going to make for better communication of science all around.”

Feldman, who facilitated SC&I’s sponsorship of the event, has a strong research background in science communication. Feldman’s research explores media’s coverage of climate change and its influence on public opinion.

Some of her research involves the effects of efficacy messages, which are messages that offer actions the reader can take to change an issue. Feldman hypothesized that a lack of efficacy messages in media coverage of climate change may be limiting the public’s willingness to accept or act to address the issue.

“We found that although there is a clear threat message about climate change in news coverage, the message about efficacy, which is what people can do about it, is much more muddled,” Feldman said. “Our concern from a social psychological perspective is that if people come away with a sense that there is this huge, looming, out of control threat and no sense that they can do anything about it, they tend to retreat from the issue.”

Feldman said that this focus on threat over efficacy when reporting on climate change may be attributed to journalistic norms. If journalists offer solutions for the issue of climate change, they may appear too biased in favor of climate advocates. Threat messaging better fulfills journalistic desire to draw the attention of the reader.

Feldman said in the early 2000s she also observed that many journalists included opinions of climate change skeptics to maintain objectivity. This worked to sow doubt among the public. Today, she said, a similar issue exists with vaccine coverage.

“The overwhelming majority of scientists think that the benefits of vaccines outweigh any risks; yet, there is a movement that counters that, and coverage sometimes includes both perspectives,” Feldman said.

Feldman explained that, often, journalists sensationalize new scientific findings, treating every story as a scientific breakthrough rather than putting the new findings into context by explaining what scientists already know and how the new discovery impacts or expands their knowledge.

It therefore becomes difficult for the public to understand the science of things like climate change and vaccination when they receive only pieces of sensationalized information.

Journalists must maintain better communication with scientists to more effectively assist the public in understanding scientific issues like climate change.

“I think journalists need to do justice to the science. That’s the most important thing. They are meant to be truth-tellers, and it’s therefore critical that they represent the scientific evidence well and accurately,” said Feldman.

Feldman teaches a course in SC&I entitled, Media, Science, and Public Engagement that explores intersections between science, media and society.