He was one of the most iconic figures of the twentieth century: a star athlete, entertainer, activist, artist, and philanthropist. A new documentary exploring the life of Muhammad Ali, “The Greatest,” as he was nicknamed, will bring the story of the heavyweight boxing champion’s life to a world-wide audience when it premieres on PBS September 19, 2021.

Assisting in the process in a key role as a consultant to the documentary’s producer, Ken Burns – along with co-producers Sarah Burns and David McMahon –  is SC&I Associate Professor of Journalism and Media Studies Khadijah Costley White.

“This film aims to create a multi-dimensional view that helps folks better understand who he was and what he represented.”

“Everyone knows Muhammad Ali as an athlete, but not as a father, an activist, a person who was on a spiritual journey,” White said. “This film aims to create a multi-dimensional view that helps folks better understand who he was and what he represented.”

White said the documentary will cover all aspects of Ali’s extraordinary life and legacy, such as his personal relationships with many of his friends, including Malcolm X, and strive to bring together these facets of Ali’s life into a story all audiences can connect with.

“Muhammad Ali was the very best at what he did. He was arguably America’s greatest athlete, and his unflinching insistence that he be unabashedly himself at all times made him a beacon for generations of people around the world seeking to express their own humanity," producer Ken Burns said, according to a PBS press release.

White’s role as a consultant is to provide feedback on both the film and telling of Ali’s story. She said her background in television allows her to assess all aspects of the film, including the narrative, storytelling, pacing, photography, b-roll, framing, and script. As a scholar of journalism, media, and Black Studies, she also aims to help ensure the narrative accurately portrays race and identity in the historical and current political contexts.

So far, White said, she has viewed nearly ten hours of draft footage of “Muhammad Ali,” providing about eight pages of notes for filmmakers. The viewing is typically followed by a lengthy discussion with producers and other advisors and consultants, all bringing their own expertise in the subject matter and its narrative.

Ali’s life, experience, and achievements are especially important to put into context in light of today’s political climate, White said. Ali believed athletes could play an important role in politics by helping to shape public ideas about American society. An example, which makes Ali’s story even more relevant today, is when professional athletes protest racial injustice by taking a knee or raising a fist during games.

“Ali is rightly celebrated for his athleticism in the ring,” said Sarah Burns in a PBS press release, “but he was equally heroic in his willingness to stand up for what he believed was right.”

“The filmmakers put a lot of work into making an accessible film for people who love boxing, politics, athletes, and Muhammad Ali himself. I would say it’s a story a lot of people will enjoy and learn from,” says White. 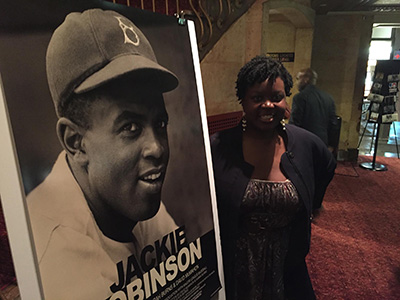 White was first brought in as a documentary consultant for Burns when she accompanied the late Lewis Erskine to a screening of “Jackie Robinson,” for which Erskine was the editor. White said Erskine, Burns and others at Florentine Films ended up finding her feedback useful, especially in regards to her expertise in race, experience in storytelling, and her knowledge of critical media analysis.

“I think I helped add a fresh perspective to some of the things the production team had already been discussing”, White said.

As a result, Sarah and Ken Burns and David McMahon have  invited her to serve as a consultant on their films -- “Jackie Robinson,” “East Lake Meadows: A Public Housing Story,” and now, “Muhammad Ali.”

According to White, “Muhammad Ali” represents an “amazing blend” of research, scholarship, and knowledge of the media, due to the academics and researchers who are providing off-camera knowledge behind the scenes. White said she likes to remind her students that media is a collaborative process using multiple individuals’ knowledge, experience, and interests.

“It’s fun because as a professor I don’t get to make as many films or media as I wish I could,” said White. “It’s really a joy to be a part of the process of making a beautiful film that so many people will see.”

White with a poster of the Jackie Robinson documentary.

Learn more about Journalism and Media Studies at the Rutgers School of Communication and Information on the website.