Media, Inequality, and Change (MIC) Center Hosts Launch Symposium
The MIC Center, a collaboration between SC&I and the Annenberg School for Journalism at the University of Pennsylvania, launched with a two-day symposium on April 11 and 12, 2019.

In the poster for the Media, Inequality, and Change (MIC) Center’s launch event, a large black crack tears apart a white expanse. It represents the theme of the two-day symposium, “Confronting Inequality: Reimagining the Future of Journalism and Work.” This crack is the divide between democratic interests and corporate power, the public-interest media system we need and the corporate-interest one we have, and the needs of workers facing a tech-driven power structure that at times seems aligned against them.

The aim of the MIC Center is to bridge some of these divides, bringing together the thought leadership advanced through academia and the activists who work tirelessly on social issues.

As Dean of the Annenberg School for Communication at the University of Pennsylvaia, John L. Jackson, Jr., said at the outset of the conference’s day-long series of panels, the center itself spans two schools — the School of Communication and Information at Rutgers University and the Annenberg School for Communication at Penn — a public school in New Jersey and a private one in Pennsylvania. They also undertake this mission at a time when right-wing political forces are arguing that academics need to be cloistered off from, rather than participate in, rigorous engagement with the world’s problems.

Media is inextricably linked with all social issues, argued Pickard and Wolfson. "Whatever your first political issue is, your second issue should be reforming the media system,” said Pickard. “You aren’t going to be getting far in your issue without a media system that is accessible for all.” 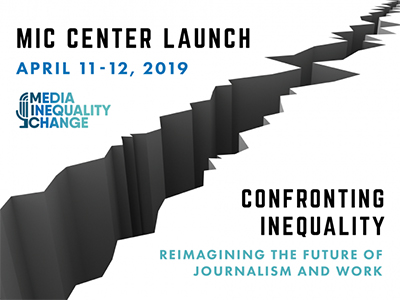 The conference kicked off on Thursday night with Jackson engaging in a keynote conversation with Naomi Klein, author and Gloria Steinem Endowed Chair in Media, Culture, and Feminist Studies at SC&I and Rutgers University. Klein spoke with Jackson about the surveillance state and surveillance capitalism as an excellent recipe for authoritarianism. She also sees climate change not just in terms of the world getting “hotter and wetter,” but also “meaner and crueler,” leading to a state of “climate barbarism” in which great harm is done to vulnerable populations as civilization is undermined.

On Friday, the morning panels focused on the structural crisis facing journalism, and then examined how that has been playing out at a local level.

Panelist Michael Copps told the audience that when he became FCC Chairman in 2001, he hoped to explore how to make this new tool of the internet a town square of our democracy. He found instead a flurry of corporate consolidation, which he was in the minority to oppose.

“Instead of meeting with innovators and entrepreneurs,” he said, “I was meeting the steady progression of media moguls wanting to get bigger and merge, talking about economies of scale.”

In sharing a similar trend going on in Europe, Goldsmiths University of London Professor Des Freedman pointed out that against the backdrop of the Brexit crisis, Britain’s media is the least trusted in all of Europe. He sees that not as a natural disaster that was unavoidable, but as a systematic failure to tackle concentrated ownership, regulate tech companies, and safeguard robust and independent journalism.

Technology has also made a seismic shift in the newsroom. SC&I's Assistant Professor of Journalism and Media Studies Catlin Petre has been studying the way that software to microtrack the real time traffic and behavior of internet readers has led to the “gameification” of journalists’ work, often to the detriment of quality. Open Markets Fellow Matt Stoller also added that Google’s dominance of both user data and the online advertising market means that publishers are no longer the gateway to their readers.

“In this giant stock market that’s totally opaque and controlled by Google, not surprisingly they take most of the cut,” he said.

University of Virginia Assistant Professor Christopher Ali (Ph.D. ’13) shifted the focus to what these trends mean for local media with some sobering statistics: 162 million Americans still don’t have access to the internet at broadband speeds. “For journalism,” he said, “that is a gut punch.”

But the panelists also see optimism for new media systems that might rise out of the ashes of the old ones, particularly at a local level.

“The good old days for journalism just weren’t that good for most people or most communities,” said Craig Aaron, President and CEO of Free Press, referring to the many minority communities who have always been underrepresented. He hopes that future discussions of journalism will have less to do with paywalls and metrics and more to do with meeting community needs.

Freelance journalist Sarah Jaffe spoke emphatically about the challenges in getting her editors to be interested in local labor stories without a national hook. But, she pointed out, journalists are one of the few bright spots in the trends toward unionization, and when journalists begin to see themselves as workers, their coverage of labor issues also changes.

Jean Friedman-Rudovsky, Co-Executive Director of Resolve Philadelphia, has been leading efforts like the collaborative local reporting project Broke in Philly, in an attempt to build the kind of solutions journalism that local communities need. Because the old business models have clearly failed, she said, both startups and established media organizations are willing to try something completely new.

In the afternoon, the focus shifted to the future of work and in particular the challenges facing gig workers.

Woodcock spoke of a food delivery driver who is so busy delivering food to people who are too busy to cook for themselves that the driver actually doesn’t have time to cook for himself, and struggles to get enough food to fuel his work. Woodcock, who has interviewed gig workers around the globe, also sees common struggles among gig workers, no matter the location.

Ravenelle told compelling stories to illustrate the way that gig work shifts risk onto employees, who don’t have the legal protections afforded by a W-2. A young gig worker told her about being asked to pick up a prescription at the pharmacy — an acceptable “task” to be hired for — but then also to ship the prescription, which turned out to be a large bottle of amphetamines, overseas.

Tarnoff cited how tech workers within companies like Amazon, Google, and Facebook have lobbied their employers — sometimes with success — to do things like end contracts with military agencies that engage in drone strikes, or divest from fossil fuels.

Lerner spoke of the successful movement to organize Silicon Valley janitors in the 1980s and 90s, and how fighting these kind of uphill battles often involves thinking who holds the capital and power in a situation — and it isn’t always 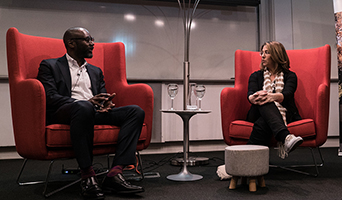 the entity that signs the worker’s paycheck.

A group of labor organizers then discussed strategies for launching and winning campaigns for workers’ rights.

Michelle Miller, co-founder of Coworker.org, pointed to the media’s portrayal of a strike or a protest and those involved, and the weight that portrayal carries. She has found success by collaborating with journalists who know how to tell stories about workers and activists in nuanced ways.

General Secretary of Independent Workers Union of Great Britain, Jason Moyer-Lee discussed the importance of launching actions that both require respective governments to enforce the existing worker protection laws and push for change to those laws to grant even more rights to laborers.

“Corporations will always try to maximize profit and control,” said Mackenzie Baris, Deputy Director of Program and Base-Building for Jobs With Justice. “How can we instead maximize benefit and control for workers?” She went on to say that tech, money, and power are neutral; the morality of these are shaped by who’s controlling them.

There are approximately one million rides happening each day in New York City, generating around $15 million. Biju Mathew, a member of the Organizing Committee of the New York Taxi Workers Alliance, asked the audience to consider what portion of that belongs to the workers and to society at large.

The final panel of the event reflected on contemporary challenges and what collaborative opportunities might lay ahead for scholars and activists, with particular focus on confronting inequality. The panelists began by naming, in their opinions, the primary social problems facing society in the current political moment, and discussing how activism, scholarship, and journalism contribute to confronting those problems.

Juan González, Rutgers Professor and Co-host of Democracy Now!, emphasized the movement toward increasingly authoritarian governments around the world and spoke of how the centralization of the media is both a product of and fuel for authoritarianism. He believes we must find a way to educate people about creeping fascism and fight to decentralize the press.

As she discussed organizing and social justice in Philadelphia, City Councilmember Helen Gym riffed on a popular Michelle Obama quote by saying, “When they go low, we go local.” She went on to elaborate on the importance of solving problems, restoring civic democracy, and creating functioning public institutions at the local level, while prioritizing the elevation of community leadership.

Temple University Professor Marc Lamont Hill cited capitalism as the source of many of the social problems facing the world today. He argued for big picture, creative thinking that attempts to solve problems outside the confines of a market economy, and encouraged the audience not to think of activism in a transactional manner.

Despite pointing out many social ills in need of addressing, the panelists remained hopeful about the possibilities of well-organized communities. “Even if we lose, the victory is in the struggle,” Hill said.

In the months and years ahead, the MIC Center intends to build on the themes and take up the challenges discussed throughout the event.

“This symposium was the perfect launch for the MIC Center’s ambitious agenda,” said Pickard. “We aim to reimagine what a truly public media system might look like, consider new alternatives for work and workers, and devise sustainable models for local journalism in a democratic society.”

For more information about the Journalism and Media Studies Department (JMS) at the Rutgers University-New Brunswick School of Communication and Information, click here.