On a chilly night in October, 40 old hospital beds on wheels, decorated and manned by Rutgers students, raced down Sicard Street in New Brunswick, all vying for the evening’s ultimate prize: first place in the Rutgers Annual Homecoming Charity Bed Races.

One of the racing beds was piloted by the “RU SURE? Changing the Culture of College Drinking,” campaign, composed of students in Professor Lea Stewart’s Advanced Health Communication (AHC) class. Their bed, decorated in the theme of the Netflix show “Stranger Things,” won the race for the first time in RU SURE’s history. 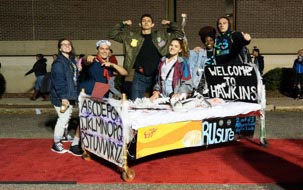 In addition to their overall first place finish, RU SURE also won the Burning Rubber Trophy for the fastest bed after placing in the top 8 in the initial race and winning three subsequent heats. Beds are judged on overall speed, bed decorations, team costumes, and donations, explained Marley Doring, Event Coordinator for RU SURE.

There are many ways RU SURE and the charity bed races overlap with the curriculum in the SC&I course. “Advanced Health Communication is an experiential learning class where students learn to design, implement, and evaluate health communication campaigns,”  Professor Lea Stewart said. “Specifically, the class implements the RU SURE campaign designed to correct Rutgers students' misperceptions about dangerous drinking.  Activities range from small tabling events to participation in large scale events like the Homecoming Charity Bed Races and our Rutgers Day drunk-driving simulation.  Our event participation is designed to communicate RU SURE campaign messages to all students, but especially to our target audience of first-year students.”

While this is the first time RU SURE has won the bed race, Doring said it’s not the first time they have raced. The group, whose mission is to spread the message that “two-thirds of Rutgers students stop at three or fewer drinks, and one in five don’t drink at all,” has entered the bed races every year since 2010. RU Sure won the Fairy Tale Ending Award in 2012, a 2nd Place Trophy in 2016, and a 3rd Place Trophy in 2018.

RU SURE’s motto this year was “turning alcohol misperceptions upside down.” Doring said, “The AHC class developed the theme and worked to include the RU SURE social norms messages into our bed design.  Because of the time of year and the spookiness that comes along with the show, class members thought fans of the bed races would enjoy a Stranger Things theme due to the recent season that was just released this past summer. Students were concerned that no one would understand the theme, but during the decoration process the night before the race they received a number of compliments for the creativity of the bed which contributed to students’ overall excitement.”

AHC student Jana D’Egidio, a communication major, and one of the racers, said, “Participating in the bed races was a great experience, it really taught me a lot about how teamwork and group effort can impact what you get out of an event like the bed races.”

Doring explained that the students enrolled in AHC prepare for the bed race project together, as a group. “Each student has a part in brainstorming ideas, decorating the bed, spreading our message during the event, and racing the actual bed.”

Managed by the Rutgers Division of Student Affairs, New Brunswick, the goal of the Homecoming Charity Bed Races is to build community among Rutgers students, and to support the New Brunswick community. This year, Doring explained, “backpack donation was the registration fee for the races. Every team had to donate a minimum of 10 backpacks in order to enter. This year there were a total of over 550 backpacks that RUPA  (Rutgers University Programming Association) will donate to an elementary school in New Brunswick.” 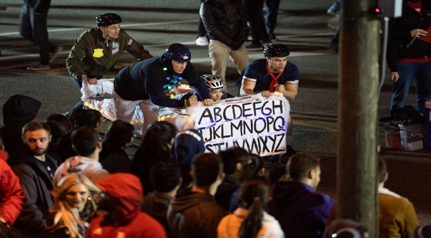 “I was very anxious about dressing up in a sailor costumes and running a bed down Sicard Street, but upon feeling the energy of the crowd and how enthusiastic everyone was about promoting their cause, the anxiety melted away and I had one of the best experiences of my life. Winning it all was icing on the cake,” Joseph F. Guddemi ’20, a communication major, and a member of the ACH class said.

The purpose of the “RU SURE? Changing the Culture of College Drinking” campaign is to correct first-year students’ misperceptions of excessive drinking as a norm. The project was initially funded by a grant from the U.S. Department of Education Safe and Drug-Free Schools Program and grants from the New Jersey Higher Education Consortium On Alcohol and other Drug Prevention and Education. RU SURE continues to receive funding from the NJ Department of Human Services Division of Mental Health and Addiction Services.

For more information on majoring in communication at SC&I, click here.

To read more about the history of the Rutgers Annual Homecoming Charity Bed Races, see the Rutgers Division of Student Affairs article, “Behind the Bed Races.”