Meet Associate Professor Matthew Matsaganis
After returning to SC&I from Greece where he spent a semester as a Fulbright Scholar in Athens, Matsaganis is continuing his research to help improve access to and utilization of healthcare services in Athens, and teaching courses in health communications 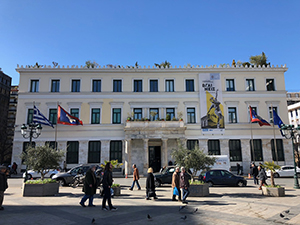 During the Spring of 2018, Matsaganis was a Fulbright Scholar working in Athens, Greece, where he studied the European economic crisis and its health effects on vulnerable communities around the city.

Matsaganis said his research, supported by the Fulbright Foundation, was designed to bring to the surface the strategies that individuals and families in four communities around Greece’s capital have developed to cope with the effects of the economic crisis that hit Greece starting in 2010 and particularly its effects on health. He is interested in how people’s communication-related behaviors and the characteristics of the communities they live in have shaped their response to the crisis.

Matsaganis hopes the study will inform ongoing and new efforts to improve access to and utilization of healthcare services in Athens and particularly in disadvantaged neighborhoods. Achieving such goals could, in time, contribute to improved health outcomes.

In an interview with SC&I, Matsaganis spoke about his desire to return to Athens, his childhood home, to help solve health-related problems resulting from the economic crisis.

“The idea was to work with students and with colleagues at three different institutions in the city of Athens, to conduct a series of interviews with residents who were most affected by the economic crisis in four municipalities across the larger metropolitan area of the city of Athens,” said Matsaganis.

He added that this fall the research team is continuing to collect data from residents but also conducting interviews with staff from municipal social services and other local organizations involved in initiatives to help residents tackle health-related issues, ranging from food insecurity to lack of access to necessary prescription drugs.

“Health and well-being indicators in Greece have deteriorated sharply since the beginning of the latest economic crisis,” Matsaganis said. “In 2013, it was estimated that 60,000 individuals over the age of 65 were going without necessary medical care and that the proportion of Greeks seeking medical care at ‘street clinics’ set up by the international non-governmental organization Doctors Without Borders had increased from 3% before the crisis to 30% (Stuckler & Basu, 2013). Moreover, every year from 2009 onward and compared to 2007 (before the crisis), more Greeks indicated that their health was ‘bad’ or ‘very bad.’ The overall number of suicides also increased by 17% between 2009 and 2012 (Kentikelenis et al., 2011). Since the onset of the crisis there has also been a substantial increase in the prevalence of depression among most age groups, with younger Greeks more likely to exhibit depression (Economou, Madianos, Peppou, Patelakis, & Stefanis, 2013). Additionally, the country experienced an HIV outbreak, primarily affecting intravenous drug users (European Center for Disease Prevention & Control, 2012).”

While working on the research project he went to Greece for originally, Matsaganis said he also launched two more projects with local collaborators. One of them, he hopes, will lead to the foundation of a nonprofit organization, tentatively named the National Observatory for Health Communication Campaigns. “I realized early in my trip,” said Matsaganis, “that the data that can support the development of health communication campaigns in Greece is very limited. There is a need there that we hope to begin to fill, working closely with local and U.S.-based researchers, and with local stakeholders, such as the Greek Ministry of Public Health.”

In addition to continuing his research this fall, Matsaganis is also teaching multiple courses at SC&I.

Last fall, Matsaganis taught an undergraduate course in health communication campaigns, and a graduate class focusing on communities and health.

Matsaganis encourages his students conduct research abroad. Matsaganis said doing so can help students develop the ability to recognize how other communities deal with the variety of challenges they face, because countries differ in terms of how they need to address health problems. “The same approach is not necessarily going to work elsewhere,” said Matsaganis. “A health communication campaign for the prevention of sexually transmitted infections here in the U.S. is not necessarily going to effective in countries of Africa, or work in European countries.”

After working in Greece, Matsaganis also recommends that every one of his students try to study in a foreign country for a semester. He said the ability to study abroad can play a major role in students’ educational experience. “Having to do work in a very different context I think, is an education in itself. It’s good to be put in a situation where you are forced to question what you consider to be the best way of doing things, to reconsider your values and priorities, to learn to see things from other perspectives,” he said.

To learn more about Matsaganis and his research, visit his faculty page on SC&I’s website. Additional information about the variety of communication programs offered at SC&I can be located on the Academics page.

For more information about SC&I's Master of Communication and Media (MCM), click here.

More information about SC&I's Department of Communication is here.

Banner photo courtesy of Matthew Matsaganis. Caption: Associate Professor Matsaganis with his research team in Athens, Greece, after a group meeting to plan for the next round of data collection. From left to right, with Professor Matsaganis: Eleni Sentemente, Vasia Karanasiou, Georgia Bougla, Artemis Anastasiou, Despina Tsalamani, Giota Kalkani, all students from the Department of Sociology of Panteion University of Social and Political Sciences.

Story photo courtesy of Matthew Matsaganis. Caption: View of the town hall of the city of Athens, in Greece, in late February 2018.