Camel Racing and Holographic Selfies: Exploring Qatar’s Use of New Media for the 2022 FIFA World Cup
As the first Arab nation to host the World Cup, Qatar’s use of Experiential Media to advertise the prestigious worldwide event, and simultaneously, itself as a national brand, provides SC&I researchers exploring EM with a living lab.

Most likely half of the world’s population will be watching Qatar in the fall of 2022 when it hosts the 22nd FIFA World Cup, arguably one of the most prestigious sporting events in the world.

The first Arab country to host a World Cup, Qatar is leveraging its role as host to publicize itself as a nation as well as advertise the World Cup. To showcase their culture, traditions, tourism and investment opportunities, and more, Qatar has been employing cutting-edge storytelling techniques and new media tools which enable users to experience Qatar virtually. These include Augmented Reality (AR), Virtual Reality (VR), Mixed Reality (MR), Extended Reality (XR), and 360° videos.

Iyer said there are many lessons from this study that can be applied to the use of EM to market/promote all brands during COVID-19 (other than nations) and experiences (other than sports and tourism).

To explore the effectiveness of Qatar’s use of these innovative tools (collectively coined “Experiential Media” by SC&I Professor John V. Pavlik), in their storytelling and brand building, Ph.D. student Shravan Regret Iyer, Pavlik, and Professor Venus Jin of Northwestern University in Qatar have conducted new research that suggests Qatar could more effectively use EM to reach their goals.

“We contend there is an opportunity for Qatar to more fully utilize EM’s potential, including multisensory engagement such as haptics (touch), gesture (such as movements of the hands, arms, head), auditory interaction, and immersion, along with 360 degrees of visual and auditory envelopment, as well as a greater selection of immersive platforms in order to showcase a range of different stories,” Iyer said.

Iyer and Pavlik presented their study “Understanding How Experiential Media are Utilized in the Making of ‘Qatar 2022’” at the 6th World Research Summit for Tourism and Hospitality, held on 14-15 December 2021 'in the Metaverse.' The conference was organized by the University of Central Florida and Elsevier publications. The study was supported by a grant from the Qatar National Research Fund.

We contend there is an opportunity for Qatar to more fully utilize EM’s potential.

Their overall findings, Iver said, show that Qatar’s VR content utilized limited qualities of EM.  He said they identified three broad thematic categories in which Qatar used EM, including the FIFA stadium and travel; Qatar’s use of cutting-edge technology; Qatar’s history and traditions, and many sub-themes pertaining to travel, lifestyle, and more.

“Our observation showed that the EM content productions emphasized the futuristic stadium design, which is also inspired by traditional Middle Eastern art,” Iyer said. “The themes also resonated with the adoption of state-of-the-art technology in the stadium for a unique matchday experience during the FIFA World Cup 2022. One such example is the Lusail National stadium EM experience, where our experience of visiting the stadium (though with limited movement in such a virtual sphere) from a first-person point of view gave us glimpses of what FIFA World Cup 2022 would look and feel like, including perspective from the stadium seating area filled with spectators.

“We also observed some state-of-the-art technology offered inside the stadium, including the opportunity to take Holographic selfies with the soccer players and a virtual mirror where the fans can try their favorite team’s jersey and purchase the same; and use of smartphone technology to enter the stadium or place food from the spectators seating area inside the Lusail National Stadium. The VR content productions also offered glimpses of traditional Qatar sports such as camel racing and pearl diving.”

Because their study is likely the first to conduct a qualitative analysis of the immersive content itself, their research addresses an existing gap in the literature. Their findings also have especially broad implications today, when other organizations planning to host virtual events during the pandemic are striving to “meet the need for contactless services and help create a humanizing experience.” 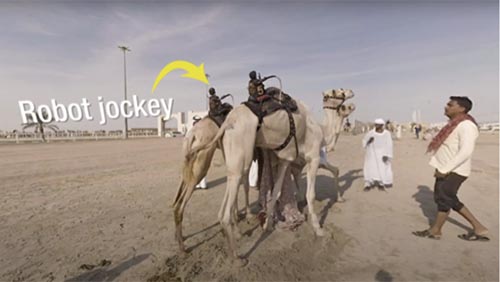 Iyer said their research further found that Qatar could expand their use of VR to build national branding by focusing on additional topics, such as presenting “VR stories of hosting and competing in past sporting events; the importance of other traditional Qatar sports (apart from the camel racing and pearl diving) such as Arabian horse racing and falconry; VR-based camel riding as an alternative tourism product; VR-based selfies/groupies with the ‘soccer stars’ and ‘soccer star locker rooms’ in relation to athletic celebrity endorsement in sports marketing; and inclusion of EM experiences on Qatar's popular travel destinations such as Souq Waqif marketplace in Doha, Doha Corniche waterfront, and the Pearl-Qatar in Doha (an artificial island spanning nearly four-square kilometers).”

“We chose the above three platforms (sports, media, and travel),” Iyer said, “because they represent Qatar’s interests and the nation’s attempts to use EM in the dynamic process of nation branding and destination marketing. We experienced/observed EM content productions using a virtual reality head-mounted display (Oculus Quest 2) and applied Pavlik’s EM theoretical framework model to identify prominent themes that were manifested in the EM contents we identified for this study.”

Because their study is likely the first to conduct a qualitative analysis of the immersive content itself, their research addresses an existing gap in the literature.

Iyer said there are many lessons from this study that can be applied to the use of EM to market/promote all brands during COVID-19 (other than nations) and experiences (other than sports and tourism).

“While EM cannot recreate the real-world experience completely as sensory technologies such as smell and taste are still in underdevelopment,” Iyer said, “EM can undoubtedly offer other multisensory qualities that can potentially make users experience the phenomenon virtually closer to the real world. 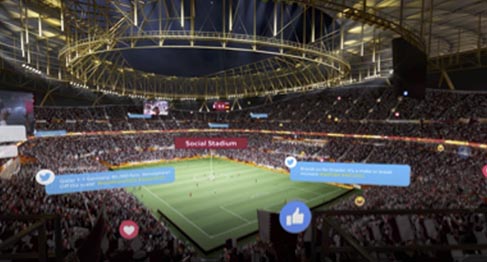 “Such multisensory qualities of EM have already been put to use by some brands to promote their products, including NikeiD VR Studio that offers users a VR experience through HMDs and haptic controllers to customize and actually build their own Nike shoes. Similarly, EM is also transforming the field of journalism and communication where media organizations such as The New York Times and CNN are creating immersive news stories on various topics, including climate change."

Ultimately, Iyer said, their research found "EM can help create real-world like experiences, if brands and organizations situate the narrative/storytelling component from the first-person point of view and offer freedom of movement within such virtual spheres while also being mindful of the ethical challenges that should be addressed."

Discover more about the Ph.D. Program and the Department of Journalism and Media Studies at the Rutgers School of Communication and Information on the website.