Naomi Klein, a public intellectual whose best-selling explorations of social, economic and ecological injustice have made her a global thought-leader, has been selected as the inaugural Gloria Steinem Endowed Chair in Media, Culture and Feminist Studies at Rutgers University-New Brunswick. The Rutgers University Board of Governors approved the appointment of Klein. 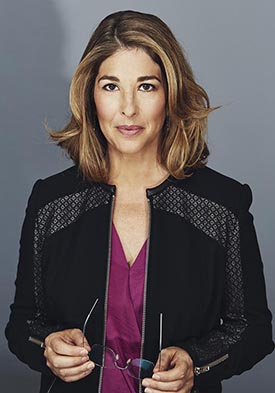 Klein’s appointment comes at a critical time in the American political and media landscape as women progressive leaders link human rights and economic justice with climate change and other global challenges.

“I am honored to have been chosen for this prestigious position and eager to join Rutgers students in connecting the dots between some of the most critical issues of our time,” Klein said.

Steinem, a feminist and human rights leader since the 1960s, will join Klein to kick off the Steinem program with a public discussion on Sept. 21. The conversation will focus on the ways that information technology and new media are reshaping culture and power relationships as well as the challenges ahead for progressive movements in the United States and beyond. The chair is a collaboration among Rutgers’ School of Communication and Information (SC&I), the Institute for Women’s Leadership (IWL) and the Department of Women’s and Gender Studies within the School of Arts and Sciences (SAS).

Over the next three years, Klein will teach, organize public events, conduct research and immerse students in debate and scholarship on a range of issues. Topics will include the role of activist journalists in revolutionary movements from abolition to feminism as well as the complex relationships among new media technologies, market forces, democracy and movements for racial, gender and economic justice.

“Naomi Klein represents intellectual brilliance and innovative thinking about the way inequalities are being perpetuated in our society,” said SC&I Dean Jonathan Potter. “Engaging with students in the classroom and beyond, she will contribute to Rutgers’ leading role in educating the next generation of responsible citizens committed to social justice.”

Dafna Lemish, who chaired the selection committee, said Klein was chosen from an accomplished and diverse pool of candidates, all highly enthusiastic about what the chair might bring to Rutgers. “She broadens the discussion of feminism to encompass the big questions of our time, such as climate change, participatory democracy and poverty,” said Lemish, associate dean for programs and a professor of Journalism and Media Studies.

Klein is the author of The Battle for Paradise: Puerto Rico Takes on the Disaster Capitalists (2018), No is Not Enough: Resisting the New Shock Politics and Winning the World We Need (2017), This Changes Everything: Capitalism vs. The Climate (2014), The Shock Doctrine: The Rise of Disaster Capitalism (2007), and No Logo (2000). Her work has been translated into more than 30 languages.

"Our late IWL director Alison Bernstein had the magnificent idea to create an endowed chair named for Gloria Steinem,” said Lisa Hetfield, IWL interim director. “Her leadership, along with a team of determined volunteer fundraisers and hundreds of generous donors, made this endowed chair possible."

In, 2014, Steinem told Rutgers Today, “When I learned of your interest in creating a chair in Media, Culture and Feminist Studies at Rutgers – and doing it in my name – it was hard to wrap my mind around. It is both a first and unique combination of two growing fields of study, and a personal honor for the work and the global movement that matter most to me.”

During Rutgers’ campaign to fund the endowed chair, the university received financial support from several major foundations and individuals, including the Ford Foundation; the John and James L. Knight Foundation; the Diller-von Furstenberg Family Foundation; the Fran Zone/John Mack Carter Fund; Like a River Fund of the California Community Foundation; and more than 400 individual donors.