Over Exposed Self-Correction Helps Speakers Manage their Self Image as “Good Citizens”
When people make a mistake while speaking, they will often use the practice of “over exposed self-correction” to manage errors that could be (mis)construed as revealing problematic or amoral attitudes or egregious lapses in competence.

Gaffe. Slip of the tongue. Blooper. Blunder. Flub. Public speaking mistakes are known by many euphemisms, and many of us, whether we are politicians, newscasters, public speakers, or just private citizens engaged in private conversations, have made them.

How speakers react – or overreact – to correct their errors as well as ward off criticism, particularly when the “slip” reveals toxic social attitudes such as racism, sexism, ageism, and other prejudices, is the subject of new Rutgers research.

“Over-exposed self-correction is what happens when a speaker not only corrects an error in their speech but also does additional interactional work to draw attention to it,” lead author Bolden said. “For example, they may repeat the error, apologize for it, and/or account for it in some way. As a result, the error really stands out, and (if committed by a public figure) sometimes even makes the news. So we wanted to know what gets accomplished by this ‘over-exposure.’”

Their research found, Bolden said, that people use over-exposed self-correction when their errors are particularly egregious – that is, when their errors may be (mis)construed as revealing the speaker’s problematic or amoral attitudes or egregious lapses in competence. Some of these errors threaten personal relationships (e.g., mispronouncing the name of a colleague), others may be taken to reveal social prejudices (such as racism, sexism, ageism, etc.) In apologizing or accounting for an error, speakers work to remediate and counter these potential ascriptions of incompetence or amorality. 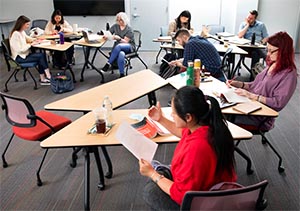 “One important question for communication research is how issues of social justice and toxic social attitudes are dealt with in interaction. Our paper contributes to unpacking the communicative processes through which people manage their public image as ‘good citizens,’” Bolden said.

Their findings further reveal that speakers would rather come across as incompetent than “evil” (e.g. prejudiced). “For example, when a speaker makes an error that may come across as conveying a prejudicial attitude, they tend to treat it as an innocent slip of the tongue, i.e. as a lapse in competence; they often try to laugh it off as well,” Bolden said.

“While condemning Putin’s invasion of Ukraine,” Bolden said, “Bush mistakenly calls it a ‘brutal invasion of Iraq’ and then immediately corrects himself and says, ‘I mean of Ukraine.’ Rather than continuing with his speech after this self-correction, Bush laughs, repeats the erroneous reference ‘Iraq’ quietly, and after laughter from the audience adds an account that attributes the error to his old age (‘seventy-five’). In our study, we investigate what speakers accomplish by doing this additional interactional work beyond simply correcting the error. Here we see Bush tries to laugh it off and attribute it to his age (implying incompetence) in an attempt to head off more serious criticisms this error can occasion.”

To conduct the study, the research team used Conversation Analysis as their research method, Bolden said. “This involves inspecting recordings and detailed transcripts of real-life interactions to find instances of this interactional practice. For this project, we drew on a very diverse dataset that includes everyday interactions between family and friends, as well as interactions in various institutional and public settings (such as news and entertainment interviews). We accumulated a collection of over 120 cases of over-exposed self-correction. Based on the collection, we examined how speakers over-expose their errors and what they accomplish interactionally via this self-correction practice – i.e. we looked at interactional payoffs of this practice.”

Social interaction researchers have a long tradition of looking into how speakers remediate problems in their talk, Bolden said, and their actions and remediation practices reveal much about people’s competencies and cognitions and socio-cultural orders. “Over-exposed correction is one such (previously unexamined) practice – it serves as a window into what participants treat as (im)proper or (un)acceptable.”