Imagine traveling to Ireland to meet Irish civil rights activists and journalists to learn how Irish-Gaelic journalism impacted Ireland’s struggles for political independence from England, or working with residents on the ancient Greek island of Crete to help diagnose public health challenges and develop proposals to solve them, or gaining hands-on professional training as an international correspondent or travel writer in Bologna, Italy.

Each class combined online academic instruction with a trip to the country they were studying, enabling the students to increase their skills and knowledge through classes, fieldwork, and excursions to experience local culture, sights, and cuisine. 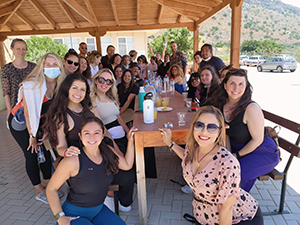 The summer course “Health Communication and Health Inequities Across the Health Professions in Greece and the U.S.,” which included a trip to the Greek island of Crete, examined communication as both a health-related outcome and an important social process through which the environments we traverse in our everyday lives shape our health. The students focused on understanding health inequalities that affect a range of populations in Greece and the U.S. including women, individuals with low socioeconomic status, ethnic and racial minorities, immigrants and refugees, people with disabilities, and individuals who identify as lesbian, gay, bisexual, transgender, queer, or intersex (LGBTQI).

The students worked individually and in small teams to diagnose public health challenges in local communities and develop proposals for how to solve them. They worked closely with faculty from both Rutgers and the Hellenic Mediterranean University to learn to:

The students focused on understanding health inequalities that affect a range of populations in Greece and the U.S. including women, individuals with low socioeconomic status, ethnic and racial minorities, immigrants and refugees, people with disabilities, and individuals who identify as lesbian, gay, bisexual, transgender, queer, or intersex (LGBTQI).

“As faculty, our primary focus was on developing a program that was intellectually stimulating,” Matsaganis said, “as well as one that encouraged students to explore, with our guidance, with their fellow students, and on their own, what it means to study and work as a health communication professional across cultures and with other professionals who have complementary but different kinds of expertise; for example, physicians, nurses, dieticians, laboratory scientists, and social workers.”

The learning goals for students by the end of the program were, Matsaganis said, “to better understand what health inequalities are, whom they affect, what causes them, and what we can do to eliminate them; to be more culturally competent health communication professionals; to feel more comfortable working in interprofessional teams; and to strengthen their research skills.”

Matsaganis said it was very rewarding to watch the students from both universities build friendships, and bond over their final projects. “Studying abroad is a more enriching experience if students remain curious about how people in other countries think about the world, how they go about addressing problems, and why they do things differently compared to how the students and people from their personal backgrounds do things,” Matsaganis said.

Learn more about the program and apply here. 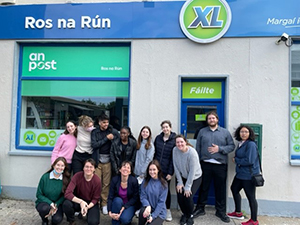 A course focusing on Ireland, titled “Media and Struggles for Democracy in Ireland,” led by Associate Professor of Journalism and Media Studies Regina Marchi, was offered last spring to 10 undergraduate and two graduate students and included a trip to Ireland for eight days in May.

Students participating in the program met for weekly classes on campus to learn about the history of British colonization in Ireland and the role of Irish [Gaelic] print newspapers in Ireland’s struggle for independence from England. Students also studied the later role of Gaelic radio and TV in the Gaeltacht civil rights movement to get broadcast media as well as health, legal, and social services available in the Irish language. The students’ final projects were feature articles. Marchi said that the top submissions will be published in the fall edition of “Kairos,” the Journalism and Media Studies Department’s online magazine.

Describing their stay in Ireland, Marchi said, “We attended lectures given by faculty at the National University of Ireland, Galway and visited various Irish language radio stations, TV stations, print media, museums, and government media organizations. Students had a free day in Galway City, which is a beautiful university town with shops, museums and walking trails. They also had an unstructured day when we took the ferry to the Aran Islands. They had opportunities to walk, bike or take a van tour around the Island of Inishmore, known for fishing, farming, and handmade Irish crafts.”

“Global immersions transform your perspectives and worldview, and I found myself walking away with new skills and strategies for navigating multicultural spaces." -- Master of Communication and Media alumna Miranda Wheeler MCM’22.

Having previously taught JMS courses in Italy and Guatemala, Marchi said the program in Ireland differed from the other programs in a few ways. While in the rural Galway region, she said, students stayed with a native Gaelic-speaking host family, and they also stayed in international hostels in Galway City and Dublin for a few days. On the Guatemala and Italy programs, in contrast, students stayed in hotels for the entire trip. The weather and language barriers varied greatly too, Marchi said. Ireland is typically rainy and cool while the weather in Italy and Guatemala is warm and sunny, and since Ireland is generally an English-speaking country, it was easier for students to communicate with the Irish. 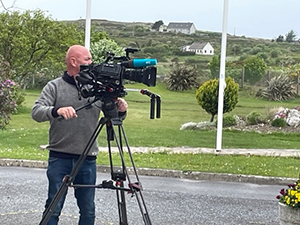 Master of Communication and Media alumna Miranda Wheeler MCM’22, said about the class, “Global immersions transform your perspectives and worldview, and I found myself walking away with new skills and strategies for navigating multicultural spaces. I am also a member of the Irish diaspora, so learning about my ancestral history and understanding its role in the content I produce today helped develop the voice I use in my own work.”

Undergraduate JMS major, John Mahoney, said, “I am a fourth-generation Irish-American, and it has been a goal of mine to visit the old country, so to speak; this program gave me the opportunity to do that. In addition to going to Ireland, I also learned about the culture surrounding the Irish language, a part of the culture of my family history which I wouldn’t have been able to learn in such detail without the program.”

Learn more about this class on the Rutgers Global website. 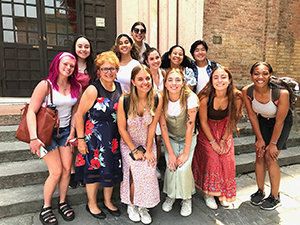 The summer course “Rutgers Global Journalism in Italy,” which has been offered by SC&I since 2017, takes place in Bologna, Italy, and provides students with the opportunity to practice working as foreign correspondents and travel writers while also exploring the cultural side of Bologna, a sophisticated university city known for its extraordinary food, provocative street art, and beautiful environment.

During their stay students are mentored by award-winning journalism faculty, and they work with University of Bologna student interpreters to write and film stories. The best student work is considered for professional publication and/or publication in Kairos, the Journalism and Media Studies magazine of top undergraduate work.

This past summer the course was led by Associate Professor of Professional Practice in Journalism and Media Studies Mary D’Ambrosio, who is the founding director of the Bologna program. SC&I faculty members D’Ambrosio and Regina Marchi alternate summers leading the Italy program.

SC&I partners with the University of Bologna to offer students the option of two intensive courses - each consisting of two weeks of reporting and writing in Bologna, and one week of online editing.

This year, the international reporting students covered topics such as the plight of Ukrainian refugees residing in Italy, the anti-war movement in Italy, and Italy’s first female music director. The travel writing students wrote about the growing bicycle culture in Bologna, and the Cinema Ritrovato, an Italian annual film festival.

“The first course is international reporting, where students practice working as foreign correspondents. They report on regional political, social, and urban issues,” D’Ambrosio said. “The second course is travel writing, where students learn to work as professional travel writers, covering culture, places, and food. In both courses, students work in teams, and partner with University of Bologna interpretation students to conduct interviews and research.”

This year, the international reporting students covered topics such as the plight of Ukrainian refugees residing in Italy, the anti-war movement in Italy, and Italy’s first female music director. The travel writing students wrote about the growing bicycle culture in Bologna, and the Cinema Ritrovato, an Italian annual film festival. 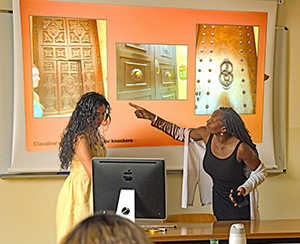 “The goal of the Italy program is to help students learn to work as foreign correspondents, typically reporting for readers in the English-speaking world, and as travel writers,” said D’Ambrosio, adding that the study abroad experiences are some of the finest opportunities offered through the Journalism and Media Studies specialization in Global Media.

Learn more about the class in Italy and how to apply on the Rutgers Global website.