SC&I Faculty and Alumni Honor Professor Emeritus Nicholas Belkin
At a November 16 retirement celebration honoring Belkin, SC&I faculty members and alumni spoke of the extraordinary impact he has had on the lives of countless students and the Information Retrieval field.

Last summer, Nicholas Belkin, an internationally known scholar of human-centered information retrieval, announced his intention to transition to Distinguished Professor Emeritus of Library and Information Science at Rutgers and to continue his cutting-edge research at Microsoft Research in Redmond, Washington.

SC&I faculty members and many of Belkin’s former students attended and spoke to the group of their affection for and appreciation of Belkin for his many contributions to research, teaching, mentoring, and his years of service to SC&I and Rutgers.

Former SC&I Dean and Distinguished Professor Jonathan Potter described how staunchly Belkin, during his many years at SC&I, had supported the LIS Department as well as all of the SC&I faculty and Ph.D. students. Potter named Belkin as an important advocate for faculty concerns. He said that Belkin’s broader impact in LIS was impressive, with over 20,000 citations to his work.

“Nick Belkin has been an intellectual giant in the LIS community, in SC&I, and Rutgers more generally,” Potter said. “Over a long career he has helped shape the trajectory of his discipline.  In SC&I, I appreciated him as a direct and outspoken champion of faculty governance, always pressing for the centrality of the faculty voice.” 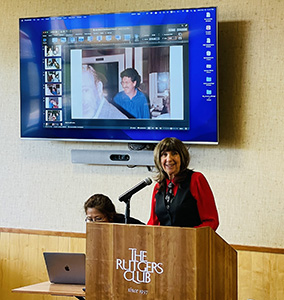 Marie L. Radford, professor and Chair of the LIS Department, spoke next. She said she first met Belkin at SC&I in the fall of 1985 – 37 years ago – when he was a full professor, and she was a first semester Ph.D. student.

Radford also added that after she earned her Ph.D. from SC&I in 1993 (her advisor was SC&I Distinguished Professor of Communication Brent Ruben), she returned years later as a faculty member at Belkin’s invitation. Radford said, “On a Tuesday in March of 2004, Belkin called and said a few words I will never forget: “Hi Marie, this is Nick Belkin. I’m calling to offer you a job.”

Others who spoke include Interim Dean and Distinguished Professor Dafna Lemish, who said, “Every place I encountered members of the information science community, I learned that Nick is considered a giant in the field! The admiration of his former students and colleagues expressed during his retirement party was overwhelming (as were the delicious stories about his skills and pleasures as an international cook!)”

Dean Emeritus Gus Friedrich, further noted that Belkin had enormous impact both nationally and internationally, and had had two Fulbright Awards.

One of his former Ph.D. students, Associate Teaching Professor Lilia Pavlovsky, who is the director of the SC&I Master of Information Program, also spoke about having had Belkin as her dissertation chair.

In addition, three other advisees of Belkin’s spoke at length about his mentorship guidance while they were Ph.D. students, including Xioajun (Jenny) Yuan, Associate Professor, University at Albany, SUNY;  Michael Cole, Principal Data Scientist LexisNexis; and Colleen Cool, Professor, School of Library and Information Studies, Queens College (and Nick’s wife).

During her address, Radford said Belkin had originally been hired by SC&I “to help create and strengthen the new interdisciplinary Ph.D. program. He became Distinguished Professor in 1998 and subsequently served as Ph.D. director twice, from 1999 to 2002, and from 2007 to 2008, with a stint as chair of the department in between from 2002 to 2005. His commitment to the Ph.D. Program and students has always been nothing short of remarkable. He was chair of 26 dissertations completed at Rutgers, and a member of dozens of other committees both at Rutgers and around the world.” 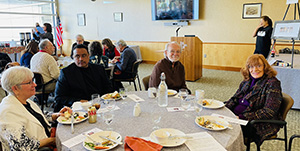 Belkin’s research, Radford noted, focused on human-centered information retrieval and the development of the cognitive viewpoint. She said, “He stands with a handful of prominent scholars as indisputably one of the most highly regarded and highly cited researchers in Information Science and Information Retrieval.

“His CV which (as Nick would put it) provides ‘excruciatingly painful detail’ lists scores of journal articles, proceedings, and conference presentations. Many of these were co-authored with his students, some of whom are here with us today to honor Nick. His research and theoretical work has been foundational for hordes of Ph.D. students and researchers in Information Retrieval.

“Over the years, Nick has been a highly sought after invited speaker and keynoter. In addition, Nick has garnered several million dollars in external grants, from such funders as NSF, IMLS, DARPA, NATO, Google, and The British Library.”